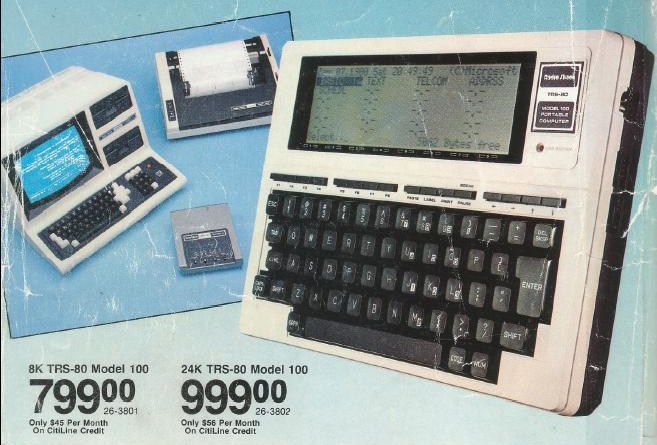 It is one of the first notebook-style computers.  Think about it, most of the portable computers around at the time were the size of a small suitcase, and they were about as easy to carry around as a microwave oven.

The Model 100 has a gorgeously tactile keyboard with 56 full-sized QWERTY style keys, as well as other function based keys.

It has a small but readable liquid crystal display. The display has an 8 line 40 character LCD with 240 by 64 pixels.

The Model was available in Tandy Electronics stores, aka Radio Shack in the United States and Canada.

The tiny digital warrior became one of the company’s most popular models, with over 6,000,000 units sold worldwide.

There were two memory options available, the 8k version, and the unimaginably large 24K version that I have here in my hot little hands.

The Model 100 was promoted as being able to run up to 20 hours and maintain memory up to 30 days on a set of four AA batteries.  I am yet to test this out myself.

The Model 100 contains the Microsoft BASIC 80 programming language.  I guess this was so that the user would not be limited to off the shelf software and could write their own to suit their own needs.  I remember that people would often publish code in magazines that you could type in yourself – line by line – and then spend almost the same amount of time debugging and looking for that typo you inevitably made.  I know this from personal experience.

There are numerous websites and videos dedicated to the Tandy Model 100, where you can download programmes, find useful tips and tricks, and also a whole bunch of hacks such as tweeting from your model 100.  And if you want to experience what the operating system is like without having to acquire the hardware, there are a range of Model 100 emulators out there.  But I should say, there is no substitute for the awesome clicky keyboard.

According to Wikipedia, invisible files in the system RAM named “Hayashi” and “Suzuki” commemorate the names of designers Junji Hayashi and Jay Suzuki. Another invisible deleted file named “RickY” refers to Rick Yamashita.  The Model 100 firmware was the last Microsoft product that Bill Gates developed personally, along with Suzuki. When reflecting on the Model 100 Bill Gates said, ”part of my nostalgia about this machine is this was the last machine where I wrote a very high percentage of the code in the product”.  That is one of the many features that I think makes this machine very unique and will make it more and more sought after.

Another interesting fact about the model 100 is the date cannot be set past 1999, which means yes, this machine is a perfect example of the Y2K bug.  I guess they didn’t expect the machines to still be functioning in the new Millenia?